Throughout the 1st trimester. With middle school students aged 8 to 10, we have started doing the digital workshop.

In this workshop, students attend 4 sessions of one hour each in small groups.

We worked on robotics with Lego Wedo material. 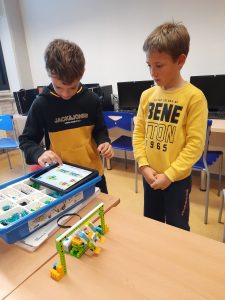 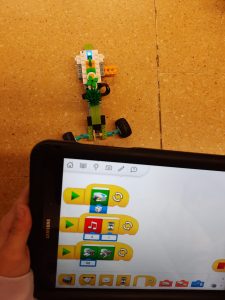 In the first session, they were explained the material and the usefulness of the basic parts (engine, CPU, ports, gears, axles…). They were also able to choose a robot model and start building it in groups.

In the second session, they continued to build the robot and were taught to program it with the Wedo application.

In the third session, they invented a story with the different robots they had built. 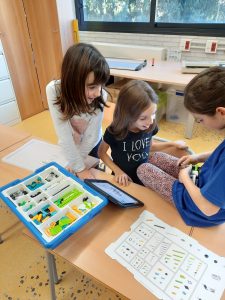 In the last session they went to a class to tell the story with the robots.

One of the stories they invented and presented to the 1st grade class was:

“A dinosaur was very hungry. He had nothing to eat and went for a walk to see what he could find. Not far from there he saw a cat. When he approached it, the cat ran away towards the river. The dinosaur followed him, but near the river he lost sight of him. There he saw a dolphin swimming happily until the dinosaur opened its mouth and he had to quickly walk towards the bridge. The dinosaur ran very fast to catch him, but when he reached the bridge, it started to close and he couldn’t pass.

Sad and desperate, he left for his home, but on the way he found some soccer players playing. The dinosaur wanted to eat them, but the goalkeeper made him a proposal: you can kick the ball once, and if you score a goal, you can eat me. The dinosaur agreed. He kicked and the goalkeeper stopped it. So the dinosaur gave up everything and had to eat a cabbage!” 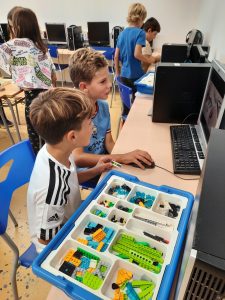